I often say that in some ways, World War One is a largely forgotten war here in the United States. Our troops were only in combat for the final nine moths or so of the war and our casualties, though high for such a short time, were nowhere near as high as the European powers. However, it was a world war and as such there were other theaters. Imagine: cavalry riding zebras instead of horses, columns of men marching through the jungles or plains, gunboats steaming up and down the great African lakes. That sounds like something from a Tarzan movie! But it all really happened. I wish I could dive into the subject and tell you all sorts of tales of midnight raids and pitched gunboat battles while soldiers and sailors dodge crocodiles, snakes, and hippopotami, but time and space prevent me from hitting this subject with anything more than a glancing blow. I can’t fully tackle this subject, but I can give it a flesh wound.

World War One was in many ways a colonial war. Competition for overseas colonies was a big contributing factor to the growing antagonism between Germany and England. When Germany unified in 1871, they set out to become an overseas power since they equated, just like the United States would do, colonies with economic and military power. The problem for the Germans is that much of the world was already spoken for. The British got into the game early and established themselves as the dominant colonial power. Remember the old adage: “The sun never sets on the British empire”. (It is, of course, because God doesn’t trust the British in the dark.) The resulting “Scramble for Africa” in the late 19th Century resulted in Germany carving out a piece of the only real continent with any territory up for grabs. When it came to imperialism, native peoples were never consulted as to their wishes, of course. The Europeans came to Africa to “civilize” them and to “Christianize (ie: Protestantize) them. This was done without regard to existing tribal cultures. But that’s always been the dark side of imperialism.

Sengalese troops in the Sudan.

In his masterful work (seriously…..it is history that reads like an adventure novel), Byron Farwell notes that though Irishman Earnest Thomas is credited as firing the first British shots of World War One, that is, in fact, incorrect. The first shot was fired by an unknown black soldier in a British uniform in Togoland a week earlier. While a marker notes the spot where Thomas fired his shot, no marker commemorates the actual spot where the first British shot of the war was fired. In other words, Africa was in the war from the beginning. Both sides used African troops and the British also used other colonial troops from India during their campaigns. There were several full scale military operations that took place. The warring powers considered this theater important enough to devote substantial resources to it. There are some really great pictures out there of black soldiers wearing German uniforms, Indian troops marching through the jungles, men on zebras, etc. I was always a fan of the old Tarzan movies (mainly because Maureen O’Sullivan (Jane) was not only hot but she had a great Irish name.

The main German commander in East Africa was General Paul von Lettow-Vorbeck. He was, quite possibly, Germany’s most able commander of the entire war. With his invasion of British territory, he was the only German commander to invade sovereign British soil. The thing is, he never really lost! He only surrendered upon being informed of the armistice. His operations are considered one of the best (and most successful) examples of guerrilla warfare in history. After the war, he returned to Germany to a hero’s welcome. In the 1930s, Hitler offered him an ambassadorship. The General’s response was fairly blunt. He is alleged to have said “Go f—k yourself.” In the 1960s, a reporter asked his nephew if he really said that to Hitler. The nephew replied “Yes, but I don’t think he put it quite so nicely.” 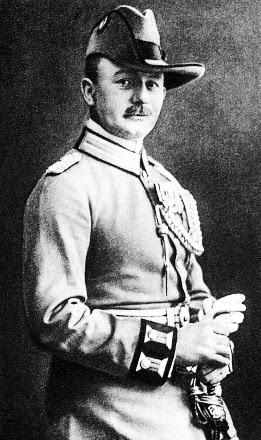 The human cost of the Great War in Africa is difficult to gauge. Since both sides used colonial troops and also civilian carriers, their record keeping was not up to the same standards as elsewhere. It is estimated that over a million Africans died, not just from the war itself, but from starvation and disease that often accompanies large scale conflict. The war laid waste to large parts of German East Africa and also some of the British territories as well, just as it did in France and Belgium. In our current centennial celebrations relating to World War One, we must remember to think of the brave African troops who fought on both sides in far away and forgotten campaigns. 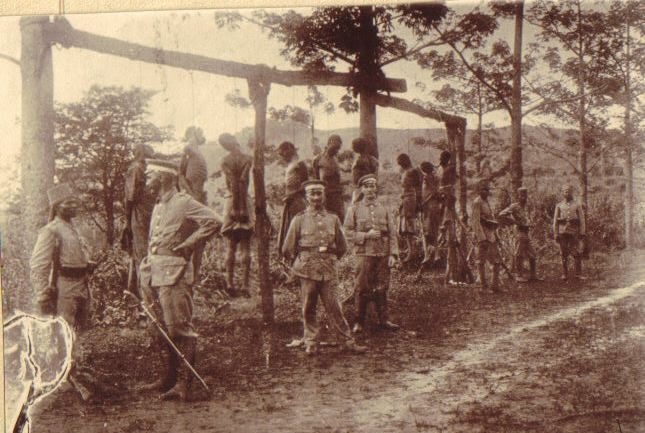 Beware the Zebra Cavalry! (Actually a horse disguised as a zebra.)

And friends, if you will allow me a moment to editorialize, I would like to point out that there is still a war raging in Africa. The Great Congo War (also known as the African World War) has been ongoing (off and on) since 1998. MILLIONS have died in the Eastern Congo and the world has paid no attention to it. If this had been happening in a country full of white people……well, it would never have been allowed to happen in the first place. Though Africa was far from peaceful before the Europeans showed up (tribes fought tribes on a regular basis), the decolonization process in Africa has been very rough in some areas, though it has gone well in others. Remember, it was in the same Congo which sees so much violence today that the Belgians waged what can only be called a genocidal campaign in the late 19th and early 20th Century. Our government cares so much about ISIS yet pays no attention to Boko Haram in Nigeria other than passing references. We stepped in to stop ethnic cleansing in the former Yugoslavia, but cared little about the slaughter that took place in Rwanda. Africa and all her people matter, regardless of what the Western Governments might think.

Here are some GREAT books on World War One in Africa.

The Great War in Africa by Byron Farwell

World War One: The African Front by Edward Paice

Check out the World War 1 in Africa Project here. (It has a great story about a WW1 German gunboat that is now being used as a ferry!)

And last but not least, if you want to raise your awareness of colonialism in Africa in general, take a look at The Scramble for Africa by Thomas Pakenham. For a great look at the current “world war” in Africa, read Africa’s World War by Gerard Prunier.

Their Highnesses are in luck! I happen to have a photo of young Lee Hutch when he was a Lieutenant in the Fire Department. Though I don’t think they meant fire department officers. Oh well. I was still an officer. With a uniform. So maybe that would still count. Right? Savin’ babies and hangin’ with ladies. (Meme reposted from @romanov_memes )
Sometimes you pet your cat. Other times your cat pets you. #cat #catsofinstagram #catlovers #catstsgram #catdad #catdaddy
The looks like my engine company after we were dispatched to a fire alarm at an apartment complex that turned out to be a fire. It went to 6 alarms and we spent 22 hrs on scene. (Repost from @romanov_memes )
“And I can’t hold the hands of time. They will move like they will move. But I can hold your hand in mine. Give my time. Give my heart. It’s all that I can do.” (Lyrics by Tyrone Wells) Check out my full Maria playlist. Link in my profile.
Last night, Anastasia sat on with her nose touching mine for ten minutes. I don’t know what she wanted. Her food bowl was full. #catsofinstagram #cat #catlife #catdad #catstagram
Every night I posted a photo of Maria accompanied by lyrics to a 90s or early 00s song. For the first time, I’ve listed all the songs and why they were included. Check out the link in my profile. Comment below if you have a song that reminds you of her. I can always grow my playlist. #marianikolaevna #mariaromanov #mariaromanova #grandduchessmaria #otma #historycrush #historicalhottie #historicalhotties