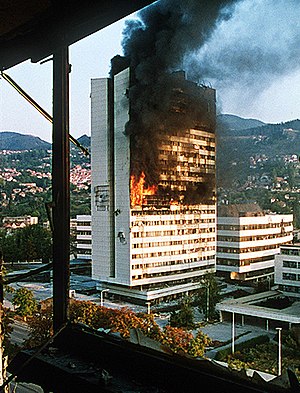 I have, on occasion, been asked if I had not entered the fire service as a young man, what I would have done for a career. Admittedly, during my years on the job, I saw my share of challenging situations and had my own close calls, I never faced the ultimate challenge. The reason why my research focuses on firefighters in war zones is precisely because I never worked in one myself. A fact, I hasten to add, that I do not regret as I am lucky to have grown up in a place where such things don’t happen. However, there is a small part of me that wonders if I could have done it. Could I have worked in Berlin during World War Two? Or London during The Blitz. Belfast during The Troubles. Or more current conflict zones like Donetsk in Eastern Ukraine and Syria. The answer is that I don’t know.

To return to the original question, though, there was a second career plan should the fire service not pan out. Had I not been able to secure employment in the fire service, I wanted to be a journalist. I was torn between a print journalist and a photojournalist. I had no desire to work in television. To be more specific, I would have wanted to go to work either as a freelancer or for the AP or Reuters and report from conflict zones around the world. Ideally, I’d find a war going on somewhere that the rest of the world is ignoring and go there to cover it. Would it be dangerous? Yes. Frustrating? Certainly. Rewarding? Possibly.

I guess part of the reason that this appealed to me was from watching news coverage from places like Sarajevo and Grozny during the 1990s. That said, I’m a better writer than I am a speaker, and so you’d not find me in front of the television cameras. If I had my life to live all over again, would I go down this path? Probably not. I’d stick to the fire service. However, if I get to have another life after this one, it is what I’ll most likely do. I’m happy with the way my life turned out, so I have no regrets about not pursuing this career. Sometimes, though, I do wonder what my life would have been like if I had.

Then again, maybe I was just born with a death wish.

This one is easy. I’d pick 4.
I’d say that depends on the book. And the....well, you get the idea.
Mark your calendars for my virtual audiobook tour! #authorsofinstagram #authorlife #author #writersofinstagram #writerscommunity #writerslife #audiobooks #audiobookstagram #fiction #novel #historicalfiction #feuerschutzpolizei #ww2