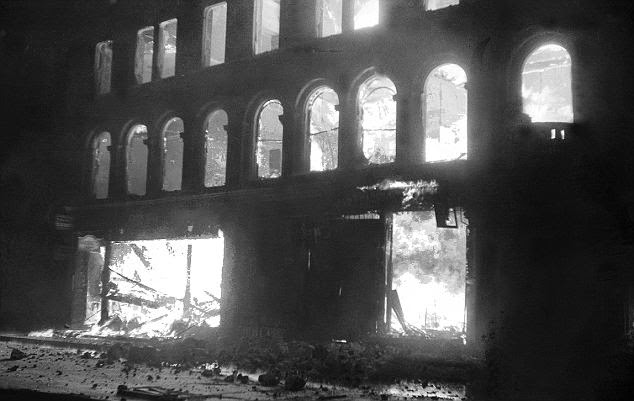 I few days ago I discussed the civil defense system in Germany during World War 2, so I thought it appropriate to revisit my ode to the London Fire Brigade during The Blitz. First published on my old site.

Just like the warning labels on firefighter’s bunker gear and helmets say, firefighting is an inherently dangerous occupation. An average of 77 firefighters died in the line of duty each year since 2010. This is down from an average of 151 per year in the 1970s. Still, the job puts incredible demands on the men and women who answer the calls. Given the fact that 9/11 and Pearl Harbor aside, the firefighters in the United States have not regularly been called upon to put out fires in the midst of bombing raids. It has happened on two days here, and one of those days, 9/11, saw over 300 of FDNY’s bravest killed in action. This hit home to me because I was a firefighter then. And having started out in life as a firefighter before I went over to the dark side of the force (law enforcement), I feel a certain kinship with the men and women who struggled to save lives and property during the darkest days the world had ever seen.

During the 1930s, architects of air power worldwide demonstrated the vulnerability of cities to aerial bombardment. The German Condor Legion, fighting in the Spanish Civil War, brought this point home to Europe when they pummeled the town of Guernica. Thanks to Pablo Picasso, who from what I understand was a pretty screwed up dude, the world knows of this because of his painting of the same name. As Europe marched closer and closer to war, the British government tried to plan ahead. The London Fire Brigade was an entirely full time department but many of the other parts of England relied on a mixture of full time and on call firefighters, similar to our volunteer firefighters in the United States. In 1937, Parliament authorized the establishment of an Auxiliary Fire Service to be made up of men and women to supplement the ranks of the paid fire crews in the event of a national emergency.  This proved to be a wise decision as two years later, war did come. By the time it ended, over 270,000 men and 70,000 women served in either the National Fire Service or the Auxiliary Fire Service. 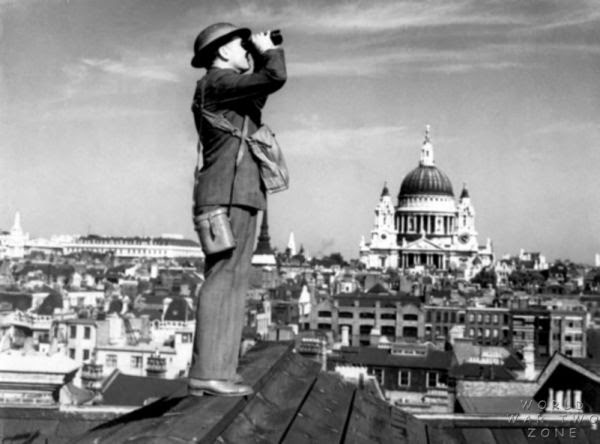 Let us first consider the difficulties faced by the men and women of Britain’s Fire Service and the people of London, Manchester, Liverpool, etc, when the bombing began. First of all, fire stations are above ground, of course, and that is where all of the fire apparatus (or appliances as they call them across the pond) are stored. This means that they are just as vulnerable as a civilian’s house or an industrial target. Second, hospitals are also above ground. Imagine being injured and taken to a hospital only to be killed by a second bomb while waiting in an emergency room. Sounds terrible and it happened. Putting out fires is tough work, but imagine doing it while bombs are falling all around you. The men and women of the Fire Service did it routinely. They did not seek shelter from the shrapnel of exploding high explosive rounds or the burning goo of an incendiary bomb. Rather they went out into the fire lit night and did their jobs. And they died in scores.

For eight months, one week, and two days the German Luftwaffe rained bombs on the people of London and also other cities in England. It began on a Saturday afternoon, September 7th, around 5pm. Today it is sometimes called Black Saturday. This would start a period of sustained bombings that would see London bombed for 57 consecutive nights at its height. Over 400 civilians died that evening and over a thousand others were wounded. Two firefighters and a female air raid warden were among those killed and over a dozen firefighters injured. If you want to see a minute by minute and bomb by bomb account, check out this link. The London docks were hit causing a massive fire. The reporting Station Office is reported to have said “Send all the pumps you’ve got! The whole bloody world’s on fire!” It is amazing that the London Fire Brigade was able to keep such records in the midst of such an attack. And they say that the Germans are good record keepers! 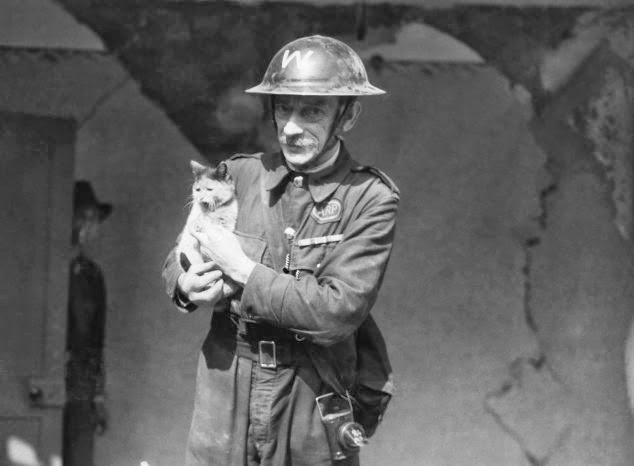 “Keep calm and carry on” was the slogan of the day. (And you thought all the posters and t-shirts you see today are a new creation!) The British people went about their jobs as best they could during the day, as there was a war on, after all, and spent their nights huddled in private bomb shelters or in the “tubes” of the city’s underground subway system. By the end of October 13,000 civilians were dead. And there were more to come. Perhaps the biggest raid of the war, with the most potential for destruction, took place on the night of December 29th, 1940, a night called the Second Great Fire of London. If the London Fire Brigade and the Auxiliary Fire Service could not rise to the occasion, the city might be lost. Given the fact that I am not a real historian, but rather a Half A$$ Historian, I will now depart from the usual narrative and take a bit of dramatic license. You will now enter a time machine and be inserted into the role of a member of the London Fire Brigade.

You are 36 hours into a 48 hour shift. The wartime demands have caused a different shift schedule. You now work 48 hours on followed by 24 hours off. Then rinse and repeat. Even your off time isn’t really off. After all, it isn’t like the Jerries won’t come over whilst you are on a brief holiday. Bombs still fall on your off period and sometimes you have no choice but to report back to work, snatching what sleep you can in between alarms. Your station, in the East End of London has escaped damage thus far, but manning the station in the midst of an air raid is terrifying. You can hear bombs falling all around you and hear the clang of shrapnel from the anti-aircraft shells bouncing off the roof. Outside a helmet is a must. You risk death otherwise. When the alarm comes in, you jump on the engine, just like in peacetime, and head out the door. But this time your driver has to dodge shell craters and debris. All hope for a quiet night is shattered when the air raid sirens begin to wail around 6pm. A quick check of the equipment, and then it is time to wait for the Central Office to call with an assignment. Women man a control board in the candlelight waiting to receive reports of fires and send you out towards an uncertain fate.

Tonight the East End gets a pasting, as does the center of the city. You race from one burning block to another trying desperately to stem the tide of the bombs which just don’t seem to stop. Around 2am, you respond to a report of a direct hit on an air raid shelter. These calls are the worst. Bombs can kill people in many different ways. One of the most unusual is “blast lung” where the victim’s lungs are destroyed by the pressure caused by high explosives. You think of them as the lucky ones. They look as though they are asleep. You want to shake them and tell them to wake up and move along. Normally, high explosives blow people apart. You don’t deal with bodies so much as pieces of bodies. Arms, legs, heads, brains, stomachs, hopes, and dreams, all shattered by an unseen enemy. And then there is the constant smell of roasted flesh which never seems to leave your nose. Even on your off days, you wake up and smell it. There are a few victims trapped. Despite the roar of nearby flames, the drone of German aircraft, and the constant bark of anti-aircraft guns, you press your ear into the rubble hoping to hear a sound. You tap on a piece of pipe and listen again. Someone faintly taps back. A fury of digging ensues and soon you uncover a young woman. Her leg is pinned beneath a heavy beam. You and several of your mates lift in while another pulls her out. Part of her shattered leg remains behind. The ambulance crew frantically searches for a tourniquet but when they manage to produce one, she is already dead. And the screams. Dear God, the screams. The screams of the trapped, the screams of the dying, the screams of those who have survived but lost their entire family. You’ll never get them out of your head. No matter how long you live.

The crew fighting a blaze one street over is caught in the open when a bomb explodes. Three of them are killed and five more seriously injured. They are whisked away to hospital where another will die a few hours later. And the fires keep coming. The city is facing a fire storm with fires merging together and creating a tornado of fire that threatens to destroy the center of the city. As you spray water on a burning building, a wall collapses nearby, adding another firefighter to the list of the fourteen who will die tonight. Another 250 will be injured, some severely. But you and your mates hold on. Against all odds, you manage to gain the upper hand. As the sun rises, partially obscured by the smoke which still wafts over the city, the dome of St. Paul’s Cathedral is still standing. Despite Jerry’s best efforts, it is still there as a symbol of the city’s determination in the face of everything that can be thrown at it.

That, Dear Readers, is a glimpse into one night faced by the men and women of the London Fire Brigade and Auxiliary Fire Service. And that is just one night, one out of many. During the course of the Blitz, two fire stations would receive direct hits. Two firemen died in the first and six in the second. The deadliest raid during the Blitz took place near its conclusion, on May 10th, 1941, when over 1300 Londoners died in a single night. And again, the members of the Fire Brigade answered the call. By the war’s end, over 1,000 men of the Britain’s Fire Service died in the line of duty, with 1/3rd of them being from London. In addition, 24 women of the Auxiliary Fire Service also gave their lives. 6,000 were seriously injured and many more slightly injured. Their sacrifices are commemorated with the National Fire Memorial near Hyde Park, pictured below. I will close with a quote from a member of the LFB who penned these words.

And many learned the nastier ways of dying

Or limped back maimed and shattered from the strife

While all endured unpleasantness and danger

And in an era here in the United States, when paid and volunteer firefighters get into heated internet exchanges about what makes a “real” firefighter, allow me to share this anecdote. The paid firefighters were issued one type of boots and the auxiliary another. One Station Officer during the Blitz walked past the tarp covered bodies of 14 firefighters. All he could see of them was the boots sticking out. 6 wore the boots of the London Fire Brigade. 8 wore the boots of the Auxiliary Fire Service. “Well,” he said “they are all equal now.” 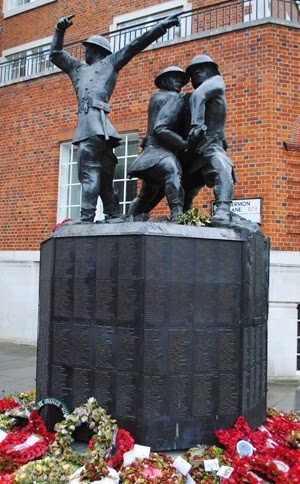 May we never forget those who fought to save lives during the worst war the world has ever seen.

4 thoughts on “London’s Burning: A Night With the London Fire Brigade During The Blitz”