Arson investigators have a difficult job since the crime in their case, fire, can do a number on your crime scene! (as can the firefighters sometimes) That said, it leaves evidence behind also. You just have to know where to look for it. Fires leave patterns, accelerants leave traces, and people leave clues. This makes a tough task a little easier. Imagine returning to the scene of a murder only to find out that it has been bombed into oblivion. That, Dear Readers, was the task faced by the intrepid Inspectors from Scotland Yard during the Second World War.

Though often we look at times of national catastrophe or struggle as a uniting factor that brings people together, that does not negate the fact that under it all a criminal element still lurks in the shadows. In the case of the blacked out cities of Europe, those shadows grew larger and the hiding places more numerous. Even Berlin, the city at the center of Hitler’s Empire was rocked by a series of bizarre sex murders in 1940 though the government kept it secret as the Kriminalpolizei (Kripo) quietly worked the case. In fact, as we will see, secrecy was a big issue in dealing with crimes in wartime.

Sir Robert Peel created the Metropolitan Police in London in 1829 while serving as Home Secretary. This paved the way for the first large professional police force in the world. And, maybe more important, it led to police officers being called “Bobbies” or “Peelers”. In fact, the Irish (my people!) brought the term “Peeler” with them to the United States and it was the first commonly used slang for police officers in eastern cities in the US. Can’t say it is all that popular anymore. I never got called that during my time in law enforcement. But it would have been cool if I had. By the time England declared war on Germany in September 1939, the British police force and the government intelligence branches (MI 5 and 6) were up to the challenge. Just as they had with the Fire Service, the government hired thousands of auxiliary policemen to help fill the spots left open by those who left to enlist in the military. However, the detective inspectors tended to be long term men who knew their way around a crime scene.

When I was a “peeler”, I worked weekends, holidays, and night because crime doesn’t take a vacation or sleep. Nor does it disappear just because your country is at war. As soon as war was declared, the British police force helped the government in rounding up enemy aliens and people with suspicious loyalties for internment. Some of those interned were British citizens, but that did not stop them, just as it did not stop us from interning Americans citizens with Japanese ancestry.  One question that we must consider is why did crime rates in England go up during the war years? I suppose there are a variety of factors. First, large numbers of people are thrown together in stressful circumstances. That is a major part of it. Second, we have the fact that for soldiers and civilians alike in England, death could come on any given night. This can give rise to a certain sense of fatalism and an anything goes attitude. And then you add in the increased opportunity for crime with blackouts and the like. Thus wartime England was not as safe as you might think.

To begin with, the fact that London remained blacked out for much of the war and people spent a lot of time in bomb shelters meant that your everyday burglars had a field day. Rings of mostly youth with a few professionals thrown in, would watch houses after dark. When the air raid sirens went off, they would see if the people left to go to a public shelter. If so, they could break into the house with little fear of detection. As an added plus, if the house was hit by a bomb or incendiary, then it would obliterate the evidence! Perfect! The British government took a dim view of this as they also did looting bombed out homes but with their resources already stretched thin, combating it proved to be a very tough task. Fraud and the black market also consumed resources, but more important than that was the “serious” crimes of rape and yes, even murder.

Time and space dictate that I can only share a few cases with you. First, we have the Dobkin Case. Apparently Mr. Dobkin got tired of his wife Rachel and decided to kill her. Plenty of murders have their origins here it seems. Anyway, he murdered her and buried her body under the rubble of a bombed out church hoping that if she was discovered, the authorities would write it off as a bombing victim. Almost, Mr. Dobkin. Almost! It took over a year for anyone to discover the body and owing to the fact that she had obviously been dead a while, an autopsy was conducted. During said autopsy, the intrepid pathologist Dr. Simpson discovered that the hyroid bone was fractured, thus indicating Rachel died of strangulation. Oops! And as an added oops, Mr. Dobkin covered her body in lime hoping to speed the decomposition but he used the wrong type! (Builder’s lime rather than quicklime) That may have actually preserved the body better than it would have otherwise been! The jury convicted him in less than a half hour and he was promptly hanged. Makes you wonder if other people tried this very thing and got away with it, doesn’t it?

Though often called a serial killer, our next dealer of death is really more of a spree killer. In serial murders, the killer has a “cooling off” period in between according to the almighty F.B.I. Young Gordon Cummins did not. He went on a six day murder spree earning him the very English name, “The Blackout Ripper”. On February 10, 1942, the body of a 40 year old woman was found in an air raid shelter. She had been strangled and her handbag was stolen. Inspectors and the pathologist surmised that the killer may have been left handed. The next day, a prostitute was found murdered in her apartment. The victim had been strangled, had her throat cut, and had her sexual organs mutilated with a can opener which was left at the scene. The scene was eerily reminiscent of Scotland Yard’s most famous open case, Jack the Ripper, as it looked like one of his crime scenes. Luckily, they were able to get prints off the can opener. The Home Office clamped down on the story as they did not want to spark a panic. However, worse was to come. And quickly.

The next day, yet another prostitute was discovered murdered in her apartment. The scene was one of the most brutal you could encounter back then. She had been strangled with a stocking. The killer took the time to mutilate her with several objects and to violate her body with a candlestick. The next day, he struck again. This time the victim was not a prostitute but a 32 year old married woman. She too was strangled and mutilated. Word reached the press despite the wishes of the Home Office and they dubbed the killer the “Blackout Ripper”. Unlike Jack, this guy wouldn’t quit. He took a day off after his fourth murder and on Valentine’s Day, he struck again. This time his dastardly deeds were interrupted by the arrival of a delivery boy and his victim survived. She reported he was wearing an RAF uniform and when he made his getaway, he left his gas mask and its case behind! Hours later a prostitute reported she had been approached and then attacked by a man in an RAF uniform too. She fought him off and he left his belt behind during his escape.

His gas mask had a serial number and inspectors tracked it to a Gordon Cummins. Upon searching his apartment, they found items belonging to the victims and matched his prints to the one on the can opener. Naturally, he was promptly convicted and even more promptly hanged, during the middle of an air raid, no less! He may have killed other women and there were some within Scotland Yard who believed he did.

As much as we would think that hard times bring a country together, as you can see, the worst elements of our society are still very much present for duty also. When the Americans arrived in England, our cousins across the pond liked to blame the presence of our soldiers for the increase in crime. They said at the time that the problem with the Americans was that they were “overpaid, oversexed, and over here!” I doubt that had all that much to do with the increased crime rates though it not doubt added to the rate of unwed pregnancies, after all, some of the English women wore utility knickers. One Yank and they were off! VD rates soared as did prostitution. I’ve seen estimates that one out of every ten American soldiers in Europe during the war contracted some sort of “unwanted guest” but I do not know how accurate those statistics are. 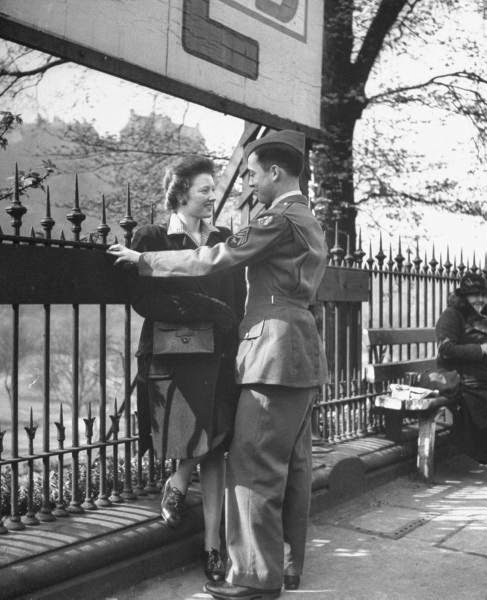 Hey lady, on a scale of zero to America, how free are you tonight?

As tempting as it is to complain about working conditions, and Lord knows I did enough of that when I was a peeler, at least you don’t have to work whilst bombs fall around you. Air raids tend to make a right cock up of crime scenes. Thankfully, we don’t have to worry about bombs. Rookie patrol officers on the other hand……

My name is Hutch and I am a Half A$$ Historian who never met an English girl wearing utility knickers, unfortunately.

P.S.: For more along these lines, check out Murder on the Home Front by Molly LeFebure and the PBS film by the same name.