Whenever I teach about the Civil War in class, it makes me a bit nostalgic. Not for the war, but of the sixteen years I spent as a Civil War reenactor. Yes, I spent four times as long reenacting the war than the war itself was. I guess my reason for getting this way is because I was younger then, of course. And it was before I suffered a serious injury which ended my public safety career and left me in constant pain. Also, I miss my friend and comrade of all those years, Robert, who passed away unexpectedly a few years ago. The laughs we shared, the funny incidents we witnessed, the people we met and the places we saw are just as fresh in my mind today as they were back then. You can see the post I wrote upon learning of his passing here.

Since I now dwell in an academic world and not one filled with fires and arsonists, I have come to understand that many (I dare say, most) academic historians look on living historians (my preferred term for what I did) with barely disguised and often open disdain. I’ve heard them claim that all reenactors are racist, Lost Cause types. I’ve heard them claim that reenactors are all gun freaks or super right wing nut jobs. People who proudly boast of how “open” and “tolerant” they are quickly lump all reenactors into one category. Are there people within the ranks who are all those things? Of course! But most are not. They are men and women who love what they do and try to bring history to a wider audience.

The 13th US Infantry on the field at Liendo.

Apart from those criticisms, the other major one I’ve heard over the years is that “Reenactors get too bogged down in details and don’t care enough about the big picture.” Maybe that is a valid criticism. However, the majority of them portray humble privates in the ranks and NEWSFLASH: they didn’t know much about the big picture either. Grant and Lee were not in the habit of discussing grand strategy with enlisted men. Does it really matter in the grand scheme of things what the specific thread count of a Union sack coat was? Probably not. Another criticism is that reenactors don’t care enough about the cause of the war. Honestly, I’m not quite sure why professional historians often fixate on this. Reenactors are not reenacting the secession crisis. I think this might touch on why it seems like over the past several years, academic historians have all but removed the battlefield from the teaching of the Civil War, preferring to talk of other things. Which, by the way, need to be discussed, but the question of slavery was decided ON THE BATTLEFIELD.

How did my time as a reenactor help me become a better teacher? At most events, there would be a school day on the Friday before the reenactment opened to the public. Schools would bus in students who frequently had to complete a scavenger hunt. They’d come by in groups of 10-15 or so and we’d talk to them and answer their questions. Some reenactors looked on this as a bit of a bother and would show up after the kids left, but I came to enjoy it. I was talking to students long before I ever thought of being a teacher myself. It gave me better insight which helped explain the decision making process on Civil War battlefields. I’ve marched ten miles (which was nothing for a Civil War soldier) as part of a preservation march and did it barefoot and on an empty stomach just to try and see what it was like for the men who did it for real. Yes, I can load and fire a rifle, work a cannon, and explain how to perform “by files right into line”. None of that really helps in the classroom, but one of the things my students enjoy the most is when I teach them how to move from a column of fours to a line of battle and back. I’m enthusiastic when teaching about the Civil War and I hope that transfers over to my performance in the classroom.

We ran a Civil War “boot camp” for high school and junior high teachers. Here I am performing a cursory examination to declare them medically fit for service.

Now, I want to tackle one subject which was kind of the reason for my post to being with. As a Southern boy who wore “the blue suit”, I want to address a statement that people (other reenactors too) frequently made. Yes, most (though not all) of my family who was in the United States at the time fought in the Confederate Army. I don’t apologize for that, nor do I feel the need to. I’m proud of the bravery they exhibited on many a field. I’m also glad they lost. Anyway, the one thing that people said to me all the time was “Your ancestors are turning over in their graves seeing you dressed as a Damn Yankee.” Here is my answer to that. First of all, I think our ancestors would be a little amused that we dress up like them and reenact something as horrific as the Civil War. Second, assuming our ancestors approved of what we do, I would think they’d want us to get it right and in the South, Rebel reenactors outnumber Yanks by 4-5 to one at most events. Since when did the odds ever favor the Confederacy that way? Third, I would occasionally switch over and portray a Confederate surgeon rather than a Union surgeon every now and then. Fourth, and most important, if you don’t like my choice of impressions, you can kiss my Irish a$$. Truthfully though, at events in the South, the Yankees are the “bad guys” and sometimes people boo as you march out to the battlefield. To be honest, it was kind of nice to be the bad guy.

So there you have it. My humble musings on my time as a reenactor. Here are some of the regiments that my ancestors served in (all Irish immigrants, by the way). 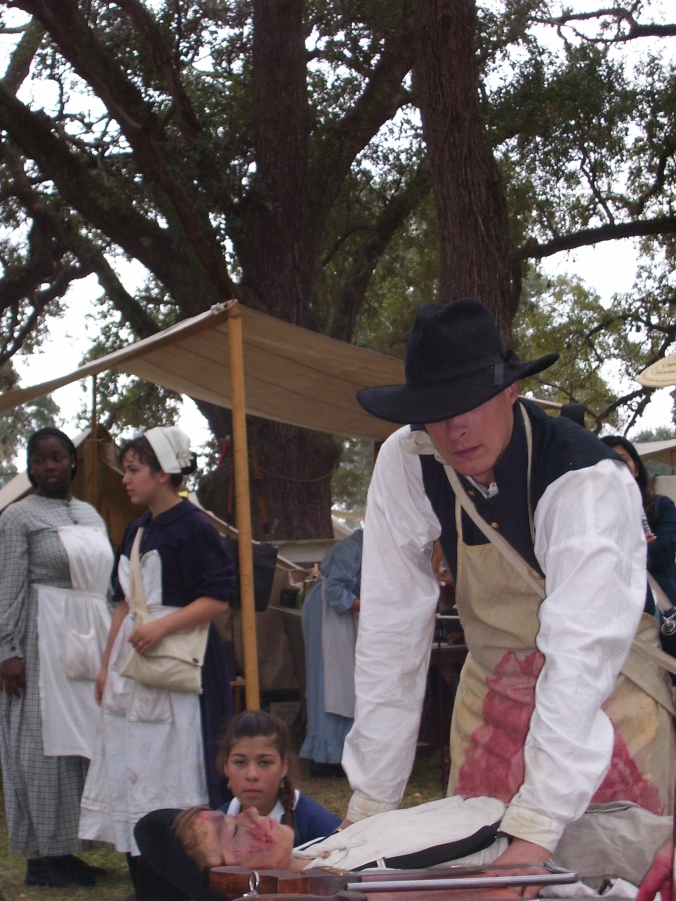