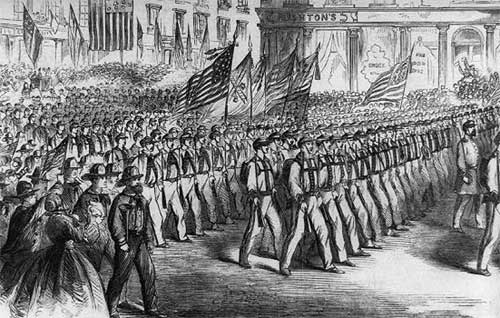 Eight enemy agents slip across the border and make their way to New York City. Their goal? To launch an attack on the city to disrupt the presidential election. It’s a story ripped from the headlines. Of 1864.

That Dear Readers, sums up the plot of my next novel. The first draft is 2/3rds completed, but the more I write, the more I realize that, despite this being a sprawling Civil War epic, I’m painting on too broad a canvas. The original story follows four characters; Patrick, a New York City fireman, Frank, a NYPD detective, Molly, a prostitute, and Thomas, a Confederate agent. All four of the characters end up interacting with one another at various points as the story moves forward, but I came to realize something. Molly is truly the linchpin of the story. In fact, it’s her story.

A recent immigrant to New York City from Ireland, she finds herself compelled into a life of prostitution and vice. Her tale is part tragic, part heroic, and she comes to find it within herself to escape the prison that her life has become. Writing her character allows me to give voice to all the victims of sex trafficking in the 19th Century and today. Though we tend to think of human trafficking as a recent phenomenon, it isn’t. Not by a long shot. Her 1864 story could very well be the story of a person in 2019.

So where does that leave us? I’m dropping Thomas and Frank’s separate story lines as they will appear in Molly’s anyway, and I’m sticking with just her and Patrick. It’s going to require a massive re-write which I will start once the semester ends. The bigger question is this: can I write primarily from the viewpoint of an 18 year old Irishwoman living in 1864 New York and make it believable? I suppose time and the critics will tell.

One thought on “What’s Up Next?”