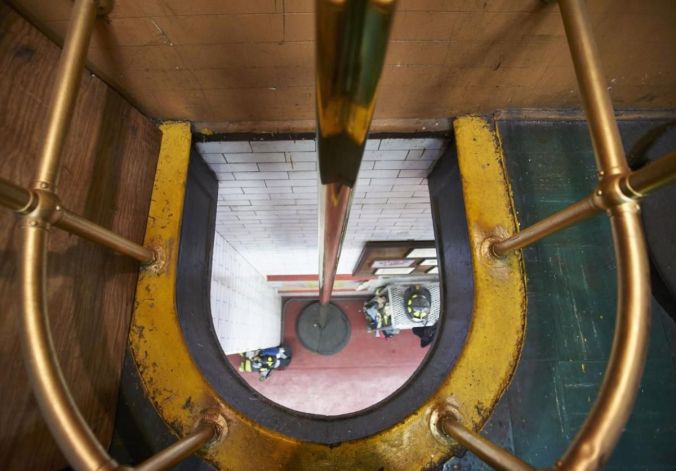 In my opinion, the pole was the best part of the job. Sadly, they are slowly disappearing. A travesty, in my opinion. I was just as excited to use it on my first call as on my last.

One day in class, a few semesters ago, I was teaching about the Triangle Shirtwaist Factory fire when a student raised his hand. As students rarely tend to ask questions (or stop by to visit during office hours), I stopped mid sentence and bid him to speak.

I started to give him my usual stock answer which doesn’t actually the question because it’s a difficult one to put into words. He interrupted me and said, “No! I don’t mean the bullshit answer you give everyone. I want to know what it’s really like.” And that got me to thinking. The feeling itself is what it feels like. I’ll explain:

It’s the feeling you get when the house lights kick on at 1:58 in the morning. You hear a bit of static from the loudspeaker and then three beeps. You leap out of bed and stagger to the pole, wiping sleep from your eyes, as you hear the dispatcher’s deadpan voice reading the assignment. “Battalion One, Engines 1, 3, and 5, Ladder 1, Rescue 1, Medic 4. Respond on Box 415. 5th Street at Franklin Avenue. Box Alarm Assignment. House Fire.” You slide down the pole, step into your boots, hitch up your pants, and shrug your arms through your suspenders. The engine coughs to life as you climb into the cab and throw your coat on. You can smell smoke in the cold night air as you pull out of the station, threading your arms through the straps of your air pack and placing the helmet on your head at an appropriately jaunty angle. In the distance, you can see a dull glow against the night sky as the radio crackles to life and you hear the dispatcher say “Confirming stills on Box 415. Report of occupants trapped.” Now, in this exact moment as you speed through the darkened streets with siren howling as you catch the reflection of your emergency lights in the vacant store front windows, there is nowhere else you would rather be than right there in that seat headed to that fire.

And so there you have it. That’s what it feels like to be a firefighter. I’m happily retired, but I’d give anything to slide the pole one more time. Just one more time…..

And…..apparently this is my 100th Post! Thank you to all my old and new friends!

One thought on “More Than A Feeling”