History Crush: when one, usually a student of history, develops a crush on a figure from the past, usually dead, based on photos of the person or on reading about them.

I have stated before that I have a history crush on Grand Duchess Maria Nikolaevna Romanova. I think I’ve even hinted at when it started, but I don’t think I’ve ever told the full story about how she came to be my history and also my guardian angel. It’s not an overly long story, though I assume that by telling it I will open myself up to accusations of being crazy. Trust me, that ship has already sailed. So here we go.

I was around thirteen years old when news broke here in the United States that the Russians announced they had found the location of the graves of the Romanov family and their retainers killed by the Bolsheviks in the summer of 1918. (Well, all but two of the family members. Those graves would be found in 2007). At that point in my life, I didn’t know much about Russia other than what they told us about the country in school during the Cold War. I did know that there had been a Tsar there and then a revolution, but that was about it. During the course of the news story, they showed pictures of the royal Tsar, then Tsarina, and then each of the children.

When the photo of Maria appeared on the screen, I had an instant sense that I knew or had known all about her, which is odd because I didn’t. Little details, like the color of her eyes being blue, came to mind. Some people don’t believe in love at first sight, which is fine, but I think it depends on the individual. I’ve been in love with my wife since the first time I laid eyes on her. Almost thirty years have gone by since that day, and Maria still owns a piece of my heart. (What’s left of it, that is.)

That explains the history crush, so why do I say she’s my guardian angel? I don’t want to go into great detail, but I will say that in perhaps the roughest spot I’ve been in during my life and career, she appeared to me and pointed the way to safety. I’m still alive, and so I figure she must be watching over me from above. 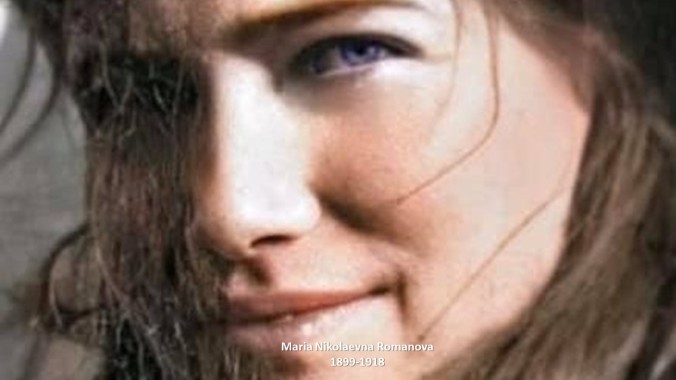 I’m an Irish Catholic boy, and the Catholic Church frowns on icons. There was a big controversy about that a thousand years ago. So don’t report me to the Pope when I say this! Maria, like her family, were canonized eventually by the Russian Orthodox Church. I keep an icon of her on my wall at home and another on my desk at work. Furthermore, I wear a Russian orthodox cross rather than a Catholic one. Because she is a Saint in the Russian Orthodox tradition, I can talk to her in my darkest hours just like I can the Catholic saints. Maria and my homeboy Saint Michael keep me safe.

Maybe when my body finally wears out, my spirit can float back in time to Petrograd right before the Revolution to a ball in the Winter Palace, and I could work up the courage to ask Maria for a dance. That would be a grand thing indeed.

If you visit my Facebook page, you can find a folder called “History Crush” which has one hundred of so photos of Maria that I’ve collected. Or you can watch a tribute video I made here .

Happy New Year to you all!

(P.S.: My German wife has a history crush on Manfred von Richthofen and has more pictures of him on her desk at work than she does of me. Just saying…)

2 thoughts on “More Than a Summer Fling”