New Year’s Eve is the time to reflect on the previous year and, in my case, it was perhaps the most momentous year of my life. If not that, it was certainly the biggest roller coaster that I’ve ever ridden thus far in my 40 years. I’ve struggled with trying to find a way to sum it all up, but I think I’ve gotten it down. So without further delay, here is my 2018 Year in Review, presented in word and picture.

The morning after surgery. One word. Pain.

If you read my 2017 Year in Review post, I referenced having been hospitalized on Thanksgiving with an obstruction in my small intestine. As they did not know the exact cause, they could not say with certainty if it would return. Well, as you can probably guess, it did. In mid-January I did the usual in-service week stuff for the college before starting my temporary full time professor job. It was the usual meetings, professional development, and convocation. The weekend before classes started was a long one, with Monday being the MLK Day holiday. Everything was set for me to start classes on Tuesday. Sunday, however, I began to feel the familiar pressure/pain in my stomach. I gave it some time, thinking it might ease up on its own. It didn’t. By 2 a.m. I was vomiting and so back to the ER we went. The diagnosis didn’t take long. It was another obstruction. Owing to a flu outbreak, I was unable to get into a room until Wednesday morning and spent the time in the ER instead. On Wednesday, the surgeon saw me and said I was booked for a rather large operation on Tuesday. I spent the time in between roaming the halls with my IV pole and visiting with the nurses. I was unable to eat anything, but that had me on TPN through a Picc line, but I still dropped a massive amount of weight, bad because I’d already lost a lot due to the issue in November. The surgery turned out to be a shorter operation than they thought it would be. I had a few complications post op, and so it was quite a while before I got to go home. On the day of my discharge, I had been in the hospital for nineteen days.

My first “meal”. Forgive the skeletal appearance. This is what happens when you drop fifty pounds due to stomach/intestinal issues!

I started to work officially on Monday, February 5th. I think my students were surprised to see that I actually existed. I owe a big thank you to my colleagues who covered my classes for me until I was able to healthy enough to come back. Throughout the month of February, I never felt entirely “right”. My stomach still bothered me from time to time. I was still dropping weight. Finally, by February 28th, I felt more normal than I’d felt since November. So imagine my surprise on March 2nd, our tenth wedding anniversary, when I ended up in the ER with, you guessed it, another bowel obstruction. I was only there for a week this time, but I was told that I needed the big surgery now. My surgeon agreed to let me try and make it until the semester ended. Also, while in the hospital I had a phone interview for a permanent position at the school and the week after I got out, an in-person interview. Luckily, I got the job.

The rest of the spring passed in a blur. I spent the time teaching, watching TV in bed at night, and editing my novel which I completed in 2018 in preparation for sending it to a professional editor in August. Before I knew it, final exams were over and it was time for the surgery. They weren’t lying when they said it would be a big operation! I was in the hospital for 8 or 9 days afterwards, but did okay. I was up walking around as fast as they’d let me, though it hurt like hell as I had a six and a half inch incision in my abdomen. I weighed 130 pounds upon discharge. Keep in mind, I’m 6’4 and weighed 185 before this all started back in November! Thankfully, as I’m writing this, I’m back up to 160, though gaining weight has proven to be difficult. All these months later, I feel decent. I’m sincerely hoping I never half to go through anything like this again. But only time will tell. 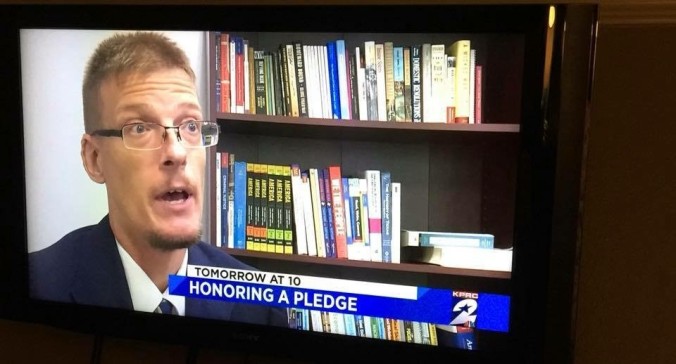 Enough of the health stuff! In June I visited the Metropolitan Research Center in Houston to delve into the archives they had on the Gulf Hotel Fire of 1943 which killed 55 people in Houston. I was able to successfully track down the mass grave where the unidentified victims were buried, and set out to see if I could get funds to place a marker. A reporter from KPRC was kind enough to air a story on it close to the anniversary of the fire. I was able to get a little support, but what I’m doing now is exploring the process for getting a historical marker on the site of the grave. That will be an easier and cheaper option.

In August, my book went off to the editor for a developmental edit. I spent much of the fall semester working on the revisions she suggested. It took a bit of time and a few more drafts, but in December I sent it back in for the copy edit. Those revisions have been done and round two of the copy edit is scheduled for Jan. 7th. Once that is complete, it will be submission time. I have a small number of indie presses to query and if I strike out, then I’ll go the self-publishing route. Be warned. I’m planning to throw one hell of a 40s themed launch party when the book hits the market, whenever that might be. (Sooner if I do it, longer if a press does it.) Also on the writing front, I’m halfway through my second novel which is set during the Civil War. That one should be ready to publish by early 2020.

As a Red Sox fan, I would be remiss if I did not mention their having won the World Series. It was an exciting summer for sure. On those long summer evenings, my wife and I always sit outside and listen to a game on the radio. Thankfully with SiriusXM and their handy app, I can get the Red Sox home radio feed on my phone or in the car. That’s useful when you live in Texas and not Massachusetts. Given the tendency of the Sox bullpen to blow saves, my sense of delight at winning the Series was only exceeded by my sense of shock. The New Orleans Saints are having a banner year too. So let’s hope at this time next year, I can talk about how they won the Super Bowl. 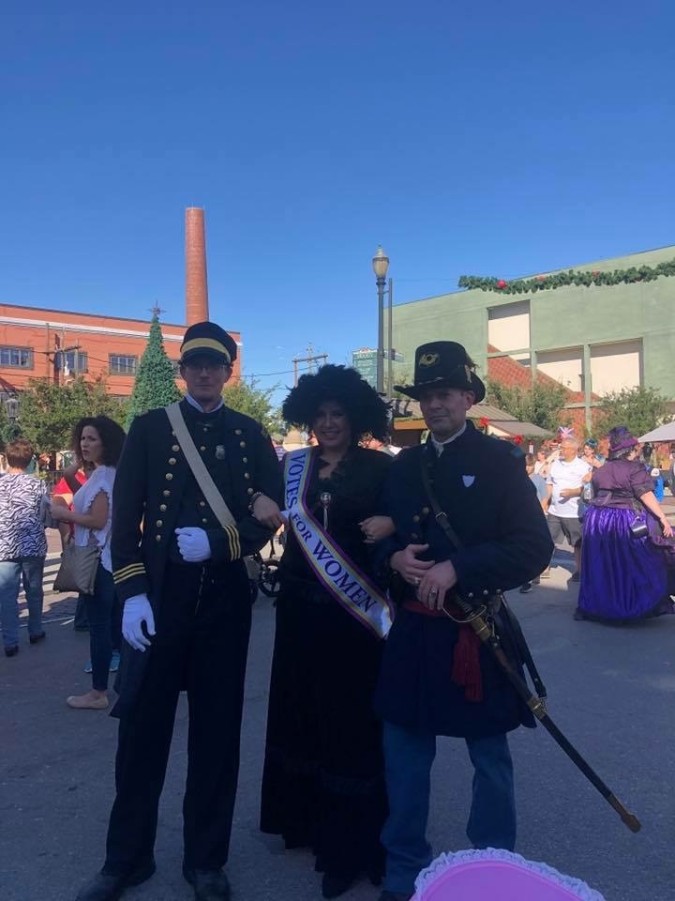 When the new semester started in late August, I got to teach an in-service session on how to communicate emergency procedures to your students. I think it went pretty well. Or at least I didn’t get any feedback that said “you suck”, so I’ll take that as a win. It was kind of an odd semester, and I never really felt like I’d hit my stride. I’m not sure why, exactly, but that is how it was. In December, my wife and I attended Dickens on the Strand in Galveston with a friend of mine. We drank beer, got our picture with a suffragette, ate fried food, and had to have my wife drive us home after having too much fun. At the end of the semester, I got a “present” of sorts from the college. A new office!

An office with a view.

My back injuries still hurt, and always will. A little more with each passing year, but such is life. I would say I’ve gotten used to it, but there really isn’t a way to get used to living with severe pain, though you can learn to cope with it. So I’ll still enjoy my New Year’s Eve brandy and cigar on my front porch as I ponder the past year and wonder about what the upcoming year will hold. I’ll spend New Year’s Eve and Day watching the Twilight Zone marathon on the SyFy Channel, which has become a tradition since I no longer have to work holidays. 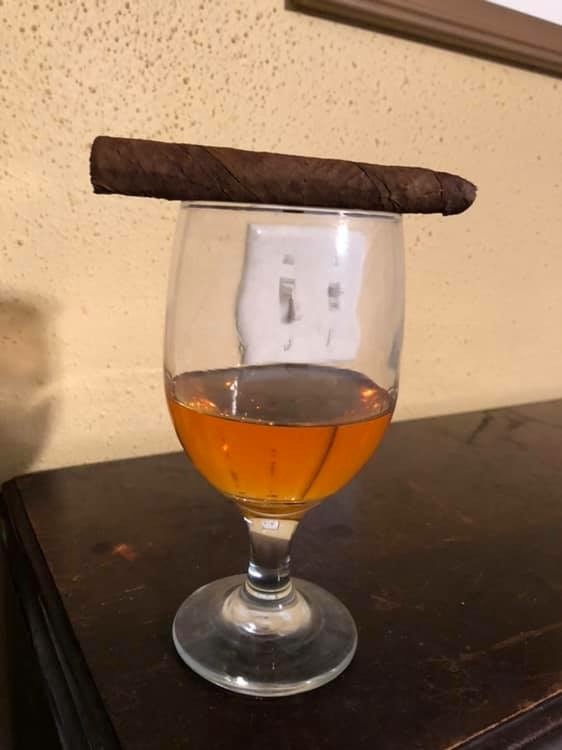 A brandy, a cigar, and a dream of the future.

So there you have it, Dear Readers. My wild and crazy year. I don’t do the whole “New year, new me” thing. In 2019, I’ll be the same profane, sarcastic prankster that I’ve always been. I do have some goals, though. Fortunately, they are all obtainable. They are as follows:

Here’s wishing you a safe and happy New Year.