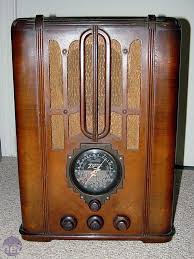 What do you do for Halloween? I have my own little tradition that I’ve done for the past few years. On Halloween night, I get in bed, turn out the lights, and listen to the original War of the Worlds broadcast on CD via my retro looking radio/CD player. Given the fact that my house was built in 1932, it’s quite possible that the original owner may have listened to the live broadcast back in 1938! The original air date was October 30th, not the 31st, but I prefer to listen on Halloween. It gives me something to do, and by having all the lights out and being in bed in the back of the house, I don’t have to deal with trick or treaters. An added plus! If you’d like to join me on this Halloween night, you can listen to the broadcast on YouTube where, thankfully, it hasn’t been pulled by the YouTube police!

Though the stories of mass panic and hysteria because of the broadcast were greatly exaggerated by the newspapers, this does still stand as one of the most significant radio broadcasts of all time. If you haven’t heard it yet, why don’t you give it a listen?

Until next time, take care of yourselves, and each other.